Now is the Time to Pay Attention to Your Plant's Steam System! 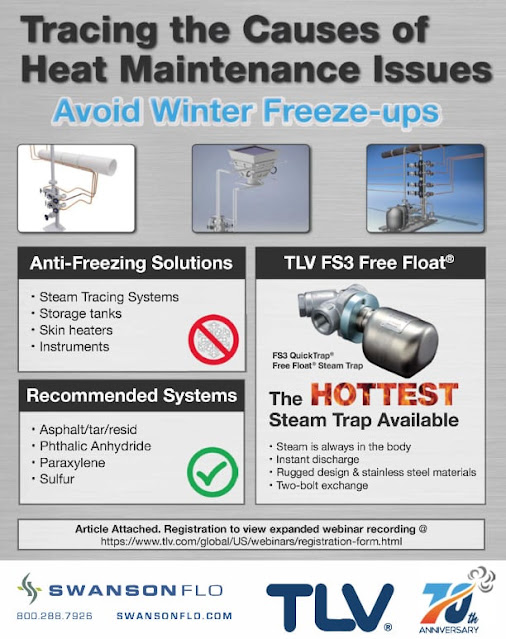 Understanding the Operation of a Steam Filter with Integral Cyclone Separator: An Inside Look at the TLV SF1


TLV Consulting and Engineering Services constructed a clear piping system to visualize the complex bi-phase flow within a steam condensate return system to determine if water hammer can be reduced or eliminated in certain less-than-ideal piping configurations.  Sometimes, condensate returns are incorrectly considered to be single-phase flow, but in reality the pipe volume can be primarily filled with flash steam. This creates a two-phase flow condition that presents challenges to the desired action of gravity drainage. Elevation changes in 2 phase condensate return lines are particularly prone to creating condensate backup which can lead to damaging water hammer. The damage can be particularly severe due to the magnitude of condensate mass present as the pipe size increases in diameter.

Two scenarios are examined. First is a commonly seen piping installation of flashing condensate with a vertical rise. Wave action can be seen in the top pipe. It is caused by high velocity steam moving over the surface of the liquid gradually forming waves within the pipe. When the wave grows large enough, it momentarily seals the cross section of the pipe, building a pressure wall behind it. This causes a slug of water to be sent down the line, potentially causing serious damage to piping, valves, gaskets or fittings.

Additionally, in a flashing condensate line, the vapor space is occupied by low energy flash steam which can collapse and generate hammer as condensate rushes into fill the void. In this video, the vapor is non-condensing air, so the violent back slam of condensate filling an instantaneous void is eliminated for safety purposes. The second video introduces a non-ideal method incorporating a drop down loop seal (or DDLS)to help mitigate some water hammer effects. The ideal solution is always to incorporate gravity drainage in the flashing condensate return system design. However, when gravity drainage was not accomplished during the original design, the DDLS may reduce hammer and can be evaluated on a case-by-case basis by a professional engineer for suitability and safe operation. Notice the less violent flow draining into the loop where the wave action was occurring in the upper pipe.

This piping configuration minimizes the length of pipe where surging can occur and reduces the mass of potential water slugs. The result can be smoother flow with lessened water hammer. Although the DDLS is demonstrated using a loop with horizontal piping to enable visualization of the vapor/liquid interface promoting upward flow, it is considered that joining two long radius elbows with no horizontal section between them could further reduce hammer.

Draining condensate and keeping it away from the steam by using proper steam trapping equipment will prevent this from happening.

The following video, courtesy of TLV, dramatically demonstrates the principle behind water hammer and its potentially devastating effects.