WOM (Worldwide Oilfield Machine) manufactures a dual seal ball valve is the only trunnion mounted ball valve with two independent seats on both sides of the ball. The primary seat takes the normal wear and tear when the valve is cycled. If it ever gets damaged the secondary seat takes over. This redundant sealing technology can more than double the useful life of the valve.

Even after the primary seat gets damaged, it will continue to work as a wiper ring. Each time the valve is cycled the primary seat will clean trash and line debris off of the ball before it can damage
the secondary seat. 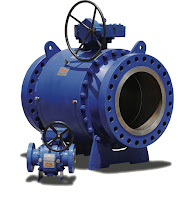 The Dual-Seal was designed specifically so that it could not trap pressure in the body cavity. This is critical in hazardous liquids service, where thermal expansion can cause pressure build-up inside the body. The Dual -Seal will automatically self-relieve to the low pressure side of the valve. However, if the third seal is installed, it forces the valve to self-relieve to the upstream side. You are in control of the direction that the self-relieving seats vent to.

Redundant sealing technology, the third seal, and being able to control the direction of the thermal expansion pressure makes the Dual-Seal ball valve unsurpassed in real life performance. This combination of seats gives you a valve that will outlast typical ball or gate valves. It will lower your operational costs, add safety, and increase reliability.